One of the more astonishing things I come across when I talk to people about beaver in arid southern California is that not only have they never thought about beaver here - they are shocked to learn Castor canadensis is already here!! From just a few males and females translocated by some a very prescient California Department of Fish and Game (now wildlife) officers these founding beavers, perhaps even mating with remnant populations of beaver in southern California have created stable and increasing beaver populations in several watersheds in southern California as well as the rest of the state. Kate Lundquist of Occidental Arts and Ecology Center (www.oaecwater.org) kindly furnished me with the below map as well as additional detailed listings of the several hundred beaver translocations that took place in the early to mid 20th century. 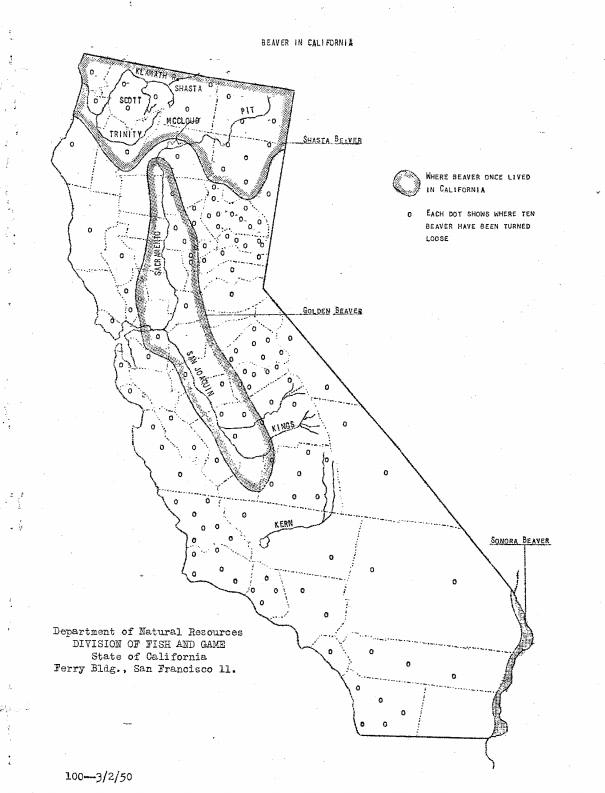 Of course one should take note of the now outdated "original range map of beaver" as interpreted by Grinnel. New date has come to light showing that the historical range of beaver in California is best reflected by the map below per the work of Lanman et. al. 2013. 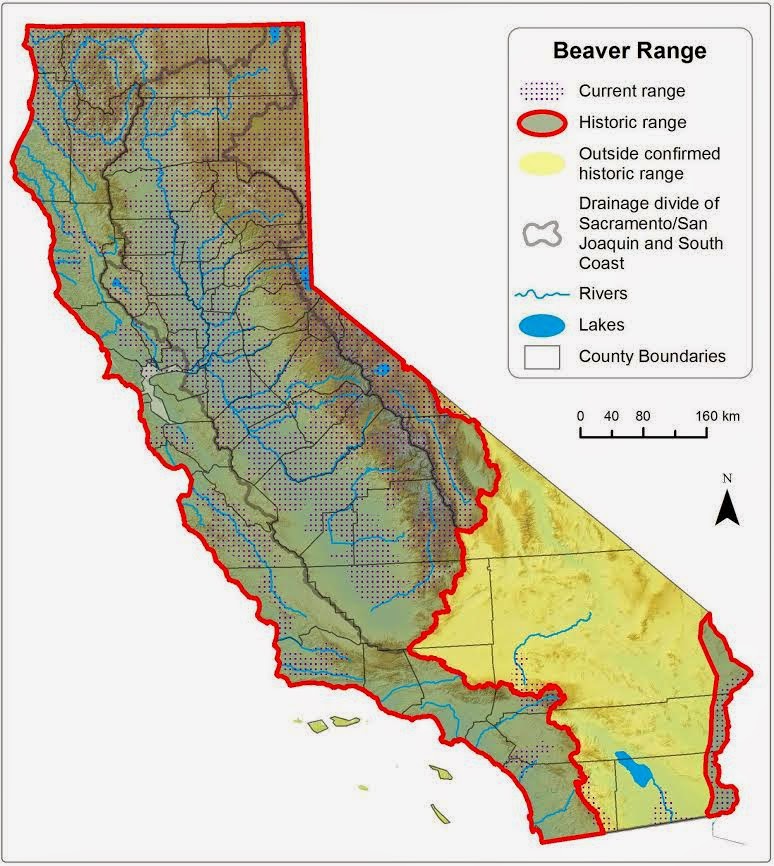 Now for this post I want to focus on a little heralded population of southern beavers represented by the stippled red dots on the river second from the bottom on the coast of California. That little river, better described as a creek in all actuality, is the Santa Margarita River. It's only about 30 miles long and like all rivers in socal is best described as intermittent. Formed by the confluence of Temecula and Murrieta Creeks, there are several well known beaver dams at the confluence. Now I have actually never visted this river but with the magic of google maps one can easily enough find the dams, from outer space!! 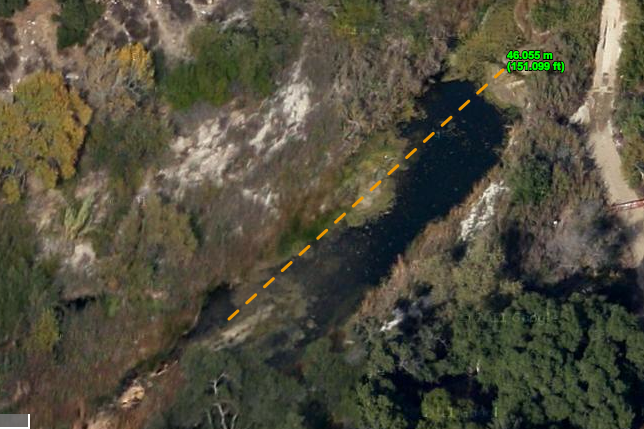 Hopefully you can see where I have measured this pond at about 47 meters (152 feet). Pretty nice litle beaver pond. Now I only recently started spending significant time tracing river/stream courses looking for beaver ponds and it is very fun I must admit. In fact I would suggest doing so is the best teaching tool for looking from a landscape perspective at where, how, and to what extent beaver do their work. I highly suggest it!! 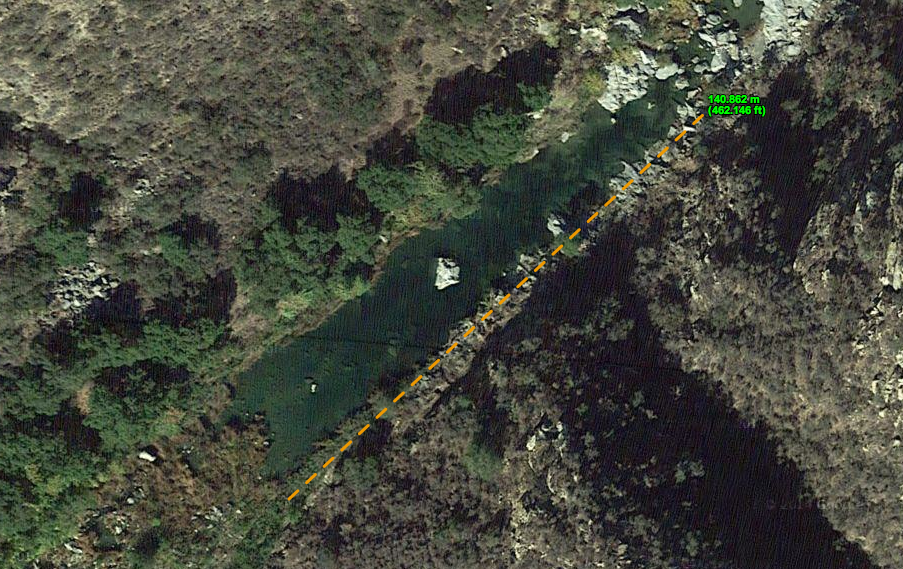 Look at this big pond above over 140 meters (462 feet long) !! This might actually be an old dam, you can see it is not too well maintained. Or it might be a naturally occurring pool but the vegetated downstream section makes me thing mud was piled up there at one point. 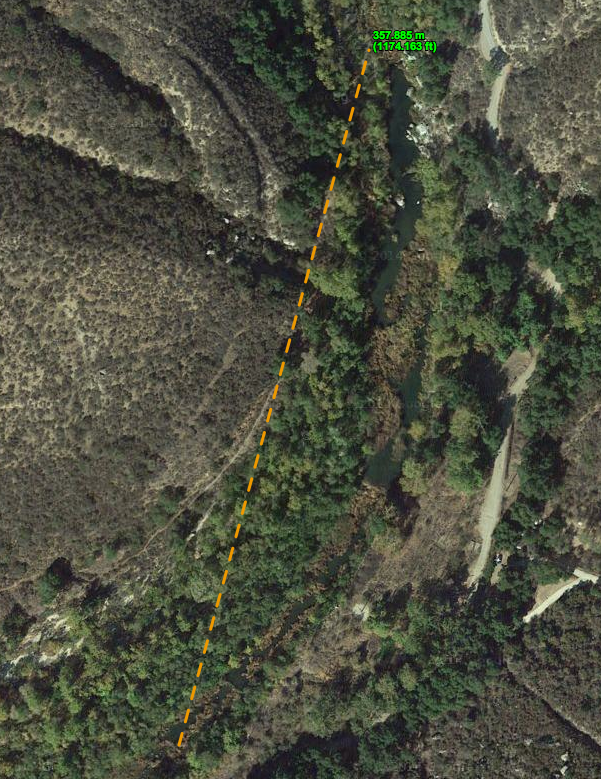 Here is a pic of a series of dams that stretches over 357 meters long, for us Americans that is over 1170 feet long!! That has got to be a good amount of water storage. In fact a series of step dams seems to be a common style of dam in these low water volume watersheds. As you can see it is in a bit of a valley bottom. This is what beavers like, they are looking for alluvial - that means sediment bottomed - valleys at relatively low gradients. Along the coast range in southern California such a style of river/creek bottom is rare, but present in all watersheds. Although socal has a lot of high gradient, rocky bottomed creeks - they eventually plateau out in either wide bottomed valleys or the coastal floodplain. 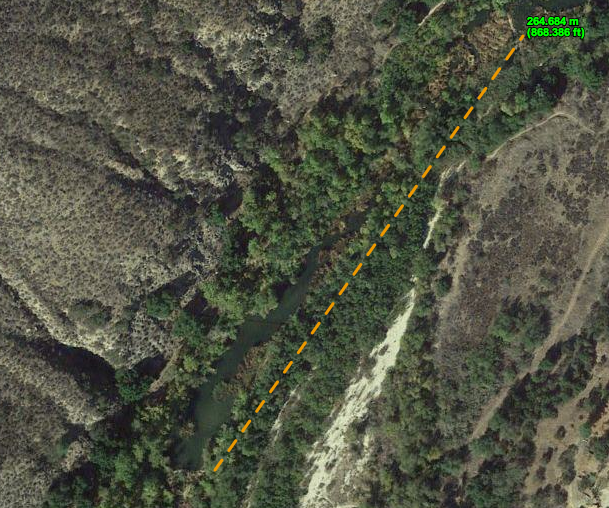 Above is another example of a beaver pond at over 264 meters (868 feet long) in a broad, alluvial valley. Remember, having that alluvium, i.e. mud, to play around with allows the emergent vegetation and the riparian layer to develop that beaver need. This is why bedrock bottomed creeks/slot canyons are not so great for beaver dams. Hard for the vegetation to get a toehold. 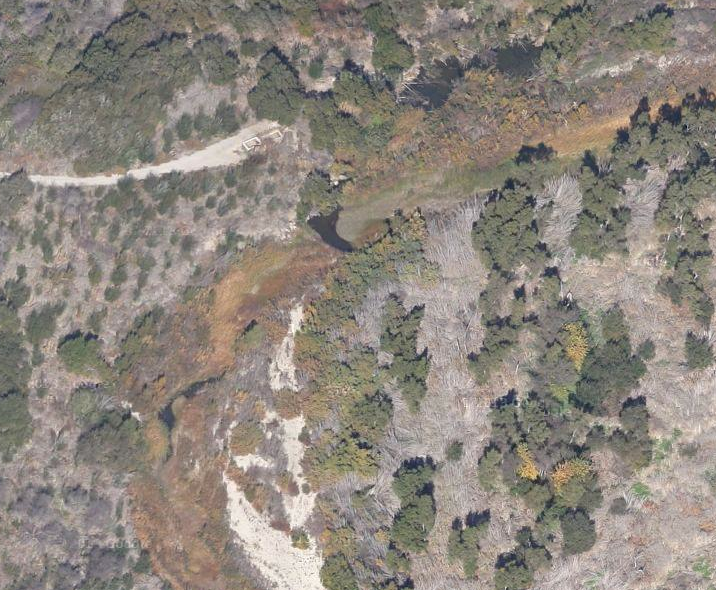 Look at the dams above. You can see that vegetation is filling in the ponds. Chances are if beaver were not along this stretch of the river it would be completely dry. But beaver activity, I suspect deepening of the pools by beaver allows year round refugia. And this is a common theme looking at beaver activity along southern California streams/rivers. Long stretches of no water, followed by a gradual increase of vegetation and some surface flows and then you start to see hints of beaver activity and them voila active beaver ponds. Did the beaver seek out the springs of water or did they over time create them? You get into a little bit of a chicken vs egg conundrum. I am reminded of the Chumash oral tradition


Timbrook (2007:180) relates
a Chumash story where “a willow stick that had been cut by a beaver was thought to have
the power to bring water. The Chumash would treat the stick with ‘ayip (a ritually powerful
substance made from alum) and then plant it in the ground to create a permanent spring of
water.”

Now that is a very powerful and eloquent parable for the beaver in southern California. In fact that story is more potent and powerful than just about anything I have came up with on this blog!! 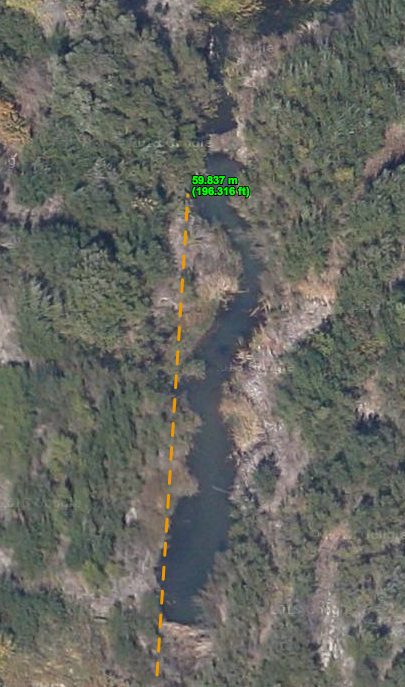 Now the Santa Margarita has several good things going for it. Its in a relatively remote section bordering San Diego, Riverside, and Los Angeles counties and parts of it go through an ecological preserve of UC San Diego and Camp Pendleton both sites of which beaver are on. Military bases and environmental conservation make for strange bedfellows but you would be surprised. Also the Nature Conservancy has invested in the river. And no dams. Unfortunately non-native beasties have heavily infiltrated the system. And as is usually the case beaver - not humans as should logically be the conclusion - are posited as responsible for the spread of invasives. From a paper Status and Distribution of Fishes in the Santa Margarita River USGS May 2000 available online:

While the presence of beaver ponds to slow the water flow (thereby locally
reducing the gradient) could be interpreted as favorable to stickleback, this would only be
the case if the exotics were absent.  In addition, the beaver dams cause increased water
temperatures that would be detrimental to the stickleback.  Threespine stickleback have
thermal requirements higher that rainbow trout but lower than arroyo chub (Swift 1989)
and would do better in the cooler flowing waters of the natural stream.  Stickleback were
undoubtedly numerous in the large slowly flowing, algae filled pools in the gorge before
the advent of exotic species.  In any case the necessity to limit or exclude beaver ponds as
favoring exotic predatory exotic species overrides any consideration of possibly
increasing habitat for stickleback that do now currently inhabit the drainage. 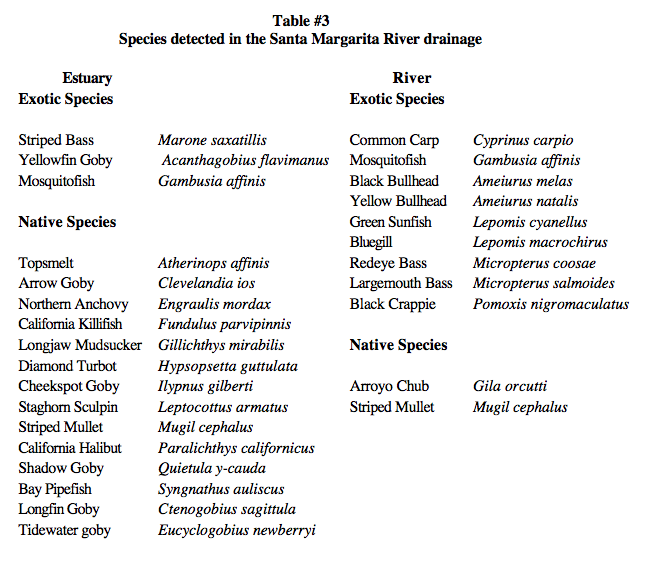 Now they only assert the beaver ponds are raising water temperatures - they actually do not measure them. How the ponds affect water temperature depends on how much hyporheic exchange is going on - as well as how deep the pond is.


Of the four originally native species to the river steelhead, pacific lamprey, arroyo chub, and threespine stickleback only arroyo chub was found in their survey. Interestingly striped mullet, an estuarine fish, went pretty far upriver. And as you can see from the list of exotics, it is  a system dominated by them. How are we to say with or without beaver that the natives would not be in trouble? I mean this is the situation on the Santa Clara River where there are no beaver but plenty of non-natives.

Nope I consider blaming beaver for the spread of invasives a bit of a logical fallacy - if you want to blame something blame humans - we put them there.

A big dilemma with non-natives and something that I think should be iterated is that many of the species in question are from the east coast of America. So beaver dams are not anything new to the ecology of these species. Furthermore if you are a green sunfish or a largemouth bass you do not really care if you are in a beaver pond, an irrigation ditch, or an oxbow - you found a good home. And secondly these east coast fish evolved in more competitive, diverse assemblages of fish than western species. So when push comes to shove they are just a bit more pugnacious, aggressive, and voracious than native fish. Holds true for bullfrogs and Louisiana swamp crawfish.


In fact in the case of bass there is a little bit of fisherman's cult emerging concerning bass and beaver ponds. Turns out, surprise surprise, the prized game fish just loves to hole up in beaver ponds and especially likes all the woody debris in the dam to hide out in during the day.

The way I see it the issue of invasives in California/arid watersheds is as such:

1) Do nothing. Admit they are too widespread and numerous to control. The new fish fauna is an alien fish fauna and this is the new normal. This is what seems to be happening anyways and is pretty much the default solution based on what I have seen. All those man made dams and reservoirs are stocked with non-native species for fishing purposes. Whenever there is a flood or water release the downstream river from the reservoir is inoculated with non-natives.

3) Mitigation. Find ways for natives and non-natives to coexist. Electroshock areas and clean out non-natives but leave natives. Encourage restoration of native predatory birds, mammals, and reptiles to hold non-natives in check. Probably the best and most practical option for maintaining native populations.

As I have discussed before beaver ponds can be utilized as a tool for trapping out non-natives. If we know such and such non-native species is utilizing beaver ponds preferentially that species can be targeted at beaver ponds. Hand capture, netting, electroshock can be utilized to clean out the unwanted but leave in the wanted. Encourage the return of native predators to hold aliens species at check. Beaver ponds are easily found via google maps and can thus be cleaned occasionally of non-natives.